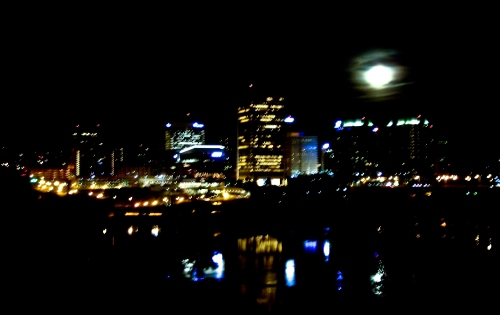 the young moon is
strung up
above the river looking
like a pale imitation
of herself,
a soul-thief who
gypsy dances
her way though mid-
winter madrugadas seducing
me to desperation
with silken slipknots
hung
between each
shadowed star.

You can find the original version in Spanish here. I’ve kept a few words that just didn’t give the same feel in English: madrugadas are early mornings— think partying-all-night-till-three-or-four-a.m. early. Lunera itself comes from “moon,” but, well… two WordReference sites, a handful of language forums, Google translator and a Guatemalan boyfriend all failed me in finding a direct translation. (Thanks anyway, Omar. ;)) The sense of it, though, for me, is making the moon “personal,” i.e. addressing it more as a person  and less as a far distant chunk of rock. And it definitely has something to do with a lullaby.  ~jsl