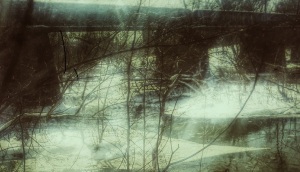 even through the thickest ice, redemption
may bubble. don’t call it the realm of the dead.

say instead: that cauldron from which every man
springs, and will again return.

sift the cold from the thaw.
this is not another poem

about what to feed your dragon.
serpent-sister, i no longer fear judgment,

have seen the green from your high walls.
atonement is made from yeast-drops

the life-beneath-frost, your nascent
breakings, the roots planted in winter.

remember the strength in those you have loved,
the gentle rain lost to the mists.

This poem focuses on the figure of Hel and Niflheim, the “Mist-home” or Realm of the Dead. According to some sources, Niflheim was the first of the nine worlds in the Viking mythos, and home to Hvergelmir, the “boiling bubbling spring” protected by the dragon Nidhug and origin of all life (as well as its final destination).

Hel is the daughter of trickster god Loki, sister to the wolf Fenrir and Jormungandr, the serpent that circles the world. She has dominion over all who die of sickness and old-age, determining their ultimate fate. The high walls and gates of her land are cited several times in the Poetic Edda.

The dead are not necessarily condemned to Niflheim, but can also pass through Nastrond’s (Shore of Corpses) poisoned streams to be cast back into Hvergelmir. Other sources say Nastrond and the feeding of Nidhug therein is reserved for those guilty of murder, adultery or oath-breaking.

The title, “If all things should weep” references the fate of Baldr, son of goddess Frigg, who sends an emissary to Hel to try to ransom him back to the land of the living. Hel replies that the love of the world for Baldr must first be tested:

“If all things in the world, alive or dead, weep for him, then he will be allowed to return to the Æsir. If anyone speaks against him or refuses to cry, then he will remain with Hel.”

When one refuses to weep for Baldr, he is forced to remain. The story is reminiscent of the Greco-Roman Orpheus, who also journeyed to retrieve a loved one from the land of the dead. Other sources have linked Hel variously to Proserpina.

4 thoughts on “If all things should weep”